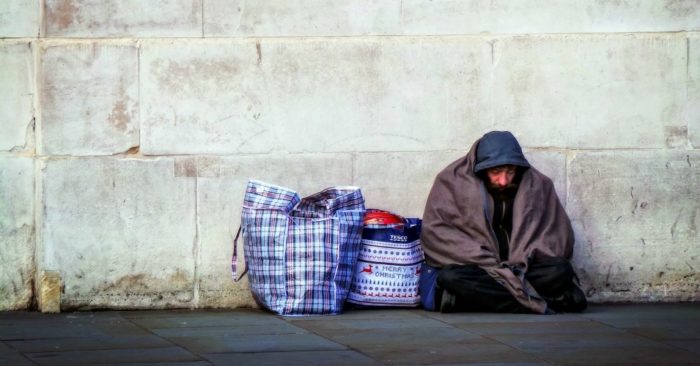 So recently when sleep was eluding me, I fell down the YouTube rabbit hole and landed on a channel called Soft White Underbelly.  A photographer named Mark Laita goes into LA’s Skid Row and gives residents some cash to go on camera and just tell their story.  How they got there, addiction stories, abduction and sexual violence stories (a regular occurrence for many of the women who live there), sex work, gang experience, etc.  A glimpse into the lives of folks that we may walk or drive past every day without thinking too much about it.  And yeah, it’s kind of rough.

And also, I think, maybe important.  The stories are all different, but frequently with some similarities.  He always asks where they grew up, and it’s pretty much all over the country.  (Large number of Midwest folks, actually….)  Many of them receive little to no government assistance, so they rely on “boosting” (stealing from stores, selling the merchandise to “fences” who resell the products), sex work, and the occasional generosity from strangers to get by and feed their debilitating addictions.

But he always asks what their home life was like as young people, and that’s where the similarities begin:  absent parents, addicted parents, cruel and abusive parents, foster care… cycles of violence and addiction passed on from generation to generation.  One young woman’s relationship with her mother stunk but her father, a drug salesman for Hell’s Angels who died of an overdose, was never present and yet always idolized… one who spent her childhood being abused in foster care and turned to sex work to give herself a little bit of agency and escape the system of domination she’d been in… PTSD, mental illnesses that resulted in being cast out from their families…. people whom the system has allowed to slip through the cracks because of convenience, gender-power structures, racism, perceived distastefulness, etc.

They speak of horrific experiences with law enforcement officers and sexual abuse….And all of them express a desire to get out and improve their situation.  And really it’s the dream for all of us, right?  To pick ourselves up by our bootstraps and move on and move out?  But for folks up against tremendous odds such as these, that’s like contemplating a casual trek up Everest.  And I think for those of us with even an ounce of privilege, those odds can be hard to understand.

It struck me that part of the important thing about it is that rarely are folks in such situations allowed to tell their own story, to speak for themselves and share their journeys with other people.  Often such folks are regarded as nameless.  Faceless.  Voiceless.  Barely-humans to be pitied and then stepped over.  I keep thinking of the movie Joker, which I expected to hate but was profoundly moved by because it’s essentially the story of how hatred and neglect perpetrated by regular, every day, good and well-meaning people can create chaos and violence.  I think that shows up a lot on Skid Row.

Sometimes Mark films story updates with folks who have already been on his channel.  The most recent update was on a young woman named Lin, who struggles with addiction and an unnamed mental illness that leaves here feeling alone, completely unloved, and isolated.  She’d just returned from 3 weeks in jail for an assault she committed whilst in withdrawal.  A friend who knew her (and her mom who she wanted nothing to do with) had seen the video and reached out to Mark to try to help her out.  When Lin got out of jail, she saw the video and the thousands of kind and supportive messages from viewers, and in her update, she looked different.  Healthier.  Hopeful.  Clean, thanks to 3 weeks in prison.  She wants to go to rehab so she can get a social worker and an apartment.  And until then, she has support from her friends.

That’s the power of story, methinks.

Of giving space to folks to encounter them where they are.

Of listening and caring, even when it’s difficult.

Of using the awesome power of media for awareness and for good.

Of uniting people across boundaries and borders.

Of listening and not leading with judgment.

Of taking a moment to glimpse the fact that when it comes right down to it, humans are usually the sum of our spirit and the things we have encountered in the world, and the things that separate us are way less important than the humanity that we share.