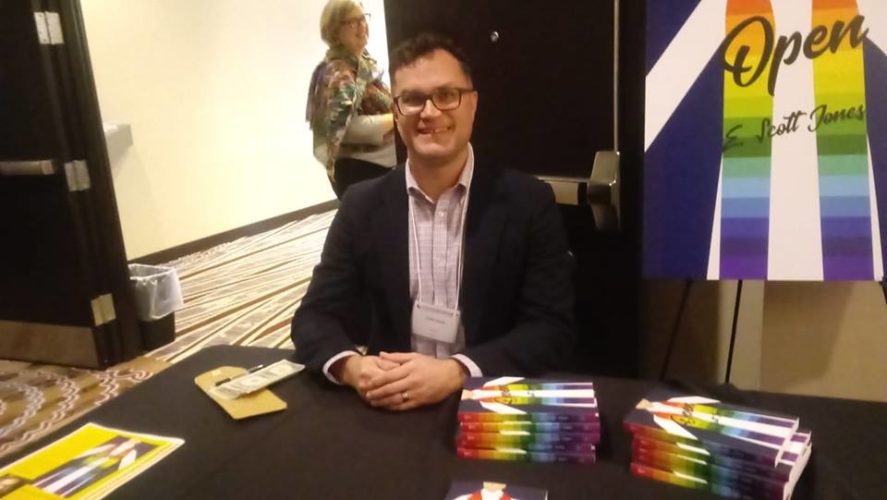 I did enjoy the 79 degree, sunny day I was in Dallas.  Beat the inch and a half of snow we had here less than a week before.

Between October 11 and 22 I traveled through six states, holding book events in six cities and towns.  Here are some highlights.

My October “Book Tour” began here in Omaha with a National Coming Out Day event at Urban Abbey where the conversation was mostly about my experience coming out as a gay man while a minister.

The next day I drove to Des Moines for the Iowa Conference Annual Meeting and heard Lawrence Richardson and Glennon Doyle speaking while selling a few copies of my book.  Both of them spoke of the importance of being vulnerable and open (ahem . . . see the title of my memoir).  I’ve invited Lawrence, a pastor in the Twin Cities, to come preach at First Central in February.  I did get to briefly meet Glennon and give her a copy of my book.  One only hopes she might promote it to her 116,000 Twitter followers.

That evening I drove to Wichita where the next day I attended the Annual Meeting of the Kansas-Oklahoma Conference selling books to many old friends and colleagues.  That night I arrived home in time to do a little winterizing before the surprise snow storm of the next day.

Then, on Tuesday the 16th, Sebastian and I left for a week of traveling.  He was with me on the book tour as Michael was attending a meeting of the United Church Board in Cleveland at the same time.  Our first stop was Tulsa where a friend from the Yale Writer’s Conference arranged a book event at the Black Wall Street Gallery.  That conversation focused on some aspects of recent Oklahoma political history before venturing into an encouraging conversation of how we deal with the current problems in American society, particularly for people who believe in being more open and inclusive.

Sebastian and I enjoyed the next day, visiting the Gilcrease Museum and Tulsa’s brand new park A Gathering Place which is phenomenal.  It’s a free park the size of a theme park and with a wealth of activities, playgrounds, gardens, etc.  A real game changer in American urban space.

Thursday brought us to Miami, Oklahoma.  Sebastian wanted off the interstate, so we drove the scenic route through the small towns of Northeastern Oklahoma, most of which have some family connection.  I showed him the land that had once been the family farm, “Why isn’t it our land anymore he asked?”

The time in Miami was quite nostalgic.  While signing books at the bookstore on Main Street I had great conversations with high school classmates, a former English teacher of mine, a woman who had appeared in the same Little Theatre production of The King and I with me, and more.  We wrapped up the day attending a high school football game and getting pizza afterwards.

I did learn that even Miami has changed.  There is an out gay minister in town and high school kids are out.

From Miami we drove to Oklahoma City to Mom’s house where Sebastian spent the next few days.  He and Mom evidently enjoyed themselves.  Meanwhile I went on to Dallas, where I enjoyed the warmth and sunlight, visited friends from college and Royal Lane Baptist Church, and signed books at the Cathedral of Hope were multiple people said, “Welcome home!”

Last week three articles were published about the book, including the great interview in the Omaha World-Herald on Sunday.

And now I’m done for a little bit, the initial flurry of the books release having now passed.  Leaving me hoping I can dive more deeply into what I’d like to write next.