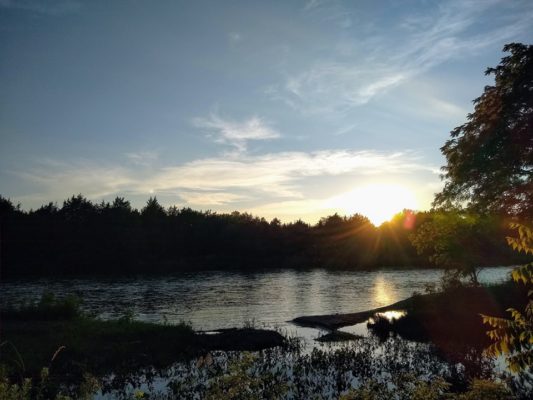 The second week of July I spent in the Sandhills, on the banks of the North Loup River outside of Burwell.  I was teaching writing for the Faith and Fine Arts Camp at Kaleo, our United Church of Christ/Disciples of Christ campground.

While packing I realized, with some astonishment, that it had been fifteen years since I attended youth camp.  How could that be?  I first attended church summer camps as a preschooler when my parents were youth directors, and then growing up I went to the Grand Lake Baptist Association campground outside Grove, Oklahoma and Falls Creek in the Arbuckle Mountains.  Falls Creek was (maybe still is?) the largest youth camp in the world.  When I was a teen five to six thousand youth a week attended.  Besides the conservative evangelical theology, the downside of Falls Creek in those years was the rule that you had to dress up for worship in slacks and dresses, despite the often 100 degree heat, in an open air tabernacle.

As a young adult, I worked as a youth minister, going to camp every summer and sometimes directing.  The churches I served in Arkansas and Texas were part of the Southwest Baptist Youth Camping Association, which was made up of liberal and moderate Baptist churches from Texas, Oklahoma, and Arkansas (and before my time Louisiana and Mississippi).  We held our camp on the campus of Austin College in Sherman, Texas.  The youth ministers and clergy from the participating churches met at least twice a year to plan camp and divide up the various duties.  Those planning meetings, held in various places around Texas, usually turned into fun retreats with colleagues.  When they were in Austin, we always had great barbecue.

So strange, then, that something that was for decades a staple of my yearly routine had vanished in my years as a pastor.

Our friend the Rev. Dr. Becky McNeil was co-directing Faith and Fine Arts Camp this year, and she successfully recruited me by saying, “You published a book in the last year, so you should teach the writing group.”

I had been to Kaleo before, including taking our own youth on a float trip early in my pastorate.  On that trip every canoe capsized except mine and Jarrett Gustafson’s, and we had to rescue everyone else.  Sometimes more than once.

Kaleo is a peaceful place.  This year the river was running high and fast.  Fortunately the week we were there the weather was mild and only one day was rainy.  Even then, we sat in the Discovery Center and watched the storm roll in.

The meadow was fully grown when we arrived, which provided beauty every evening when thousands of lightning bugs lit it up in what one camper (in the writing group) described as “a second night sky.”  By the way, our son Sebastian calls them “light-‘em-up bugs.”

My favorite Kaleo activity is tubing down the river.  This year there were some mild rapids.  As I shot down those, I squealed with glee.  The highlight of the float was when we rounded a bend and a big red Angus bull was standing in the river.  Fortunately, he only seemed confused by the tubers.

Sebastian’s been asking about church camp now.  So, in a couple years, it will be my turn to take him.

What are your camp memories?