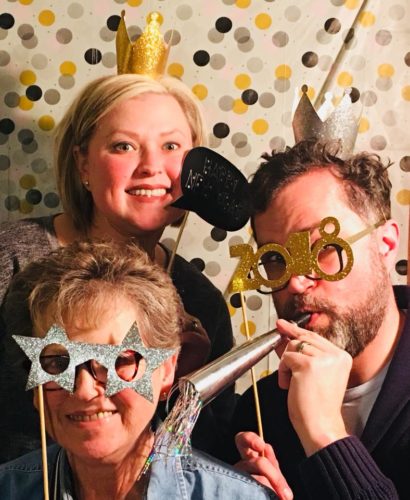 “I’m not ready to be this old,” said my sister Kelli.  It was New Year’s Day, the day before Mom’s surgery, and Mom had just spent an hour with the two of us going over all of her vital documents, her financial records, her passwords, etc.  She was preparing us just in case something happened during surgery.  We had also discussed all the things medically she did and didn’t want in case a crisis ensued.

The Monday before Thanksgiving Mom had texted informing us that her local physician had discovered a mass on her ovary and that she was to go for further tests.  Only later did we learn she had been in pain for months, but it had taken her a while to get an appointment.  The first test results suggested the mass was benign, but she required surgery to remove it.  When, two weeks later, she met with the local surgeon, that physician thought it was cancerous.  Results of a blood test supported her diagnosis.

That day I decided Mom needed to come to Omaha.  One of the premier cancer centers in the nation is seven blocks from my house.  She needed the best care possible and needed to stay with family instead of being home alone during a time like this.  When I called to persuade her, she immediately agreed.  Later she told me that she had already decided she was going to ask if she could stay with me or my sister and was worried about asking.

Her local surgeon agreed to transfer the case to Omaha but needed to know whom to transfer her to.  I e-mailed church members who work at the Med Center and heard back from all of them within a short time.  That evening Dr. Phil Smith called me at home and said he had arranged everything.  Before 9 a.m. the next day Mom had been called, her appointment set up, and her case transferred here.  I was never so happy to know people.

My sister said that she could drive Mom halfway to Omaha that Saturday, so we met for lunch in Fort Scott, Kansas, and I brought Mom to our house.  We didn’t know how long she’d be here, but figured it might be many months.

That day we decorated the Christmas tree.  What a joy to have Mum-mum here for Christmas, especially as this year was the first that Sebastian seemed to really get into it, anticipate it, and understand what was happening.  She was here for the Children’s Christmas program, caroling, and the candlelight service, plus all the shopping and baking and preparations at home.  Despite the anxiety hanging over us, or maybe because of it, we had a wonderful holiday together.

At her clinical appointment the surgeon here said, “I don’t think it’s cancer.”  But we didn’t know for sure and still dreaded the surgery, scheduled for January 2.  My sister drove up from Oklahoma for it, arriving in the bitter cold of New Year’s Eve.  We had another fun family holiday as we prepared for the surgery.

90 minutes into the surgery they told us they were closing Mom up and that the surgeon would be out to see us soon.  “No cancer,” she said.  Everything had gone better than the best case scenario she had detailed before the surgery.  At the end of the conversation, she smiled and said, “Happy New Year.”

And Mom, who never handles surgery well, rebounded quickly, because of some of the cutting edge pain treatments she was given and the amazing level of care she received here.  Within a week, I drove her home to Oklahoma, and she’s planning a vacation with my sister to celebrate.