Scott’s Column: How Easy It Ought to Be 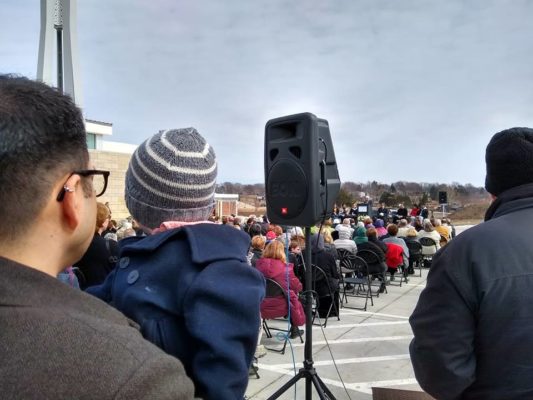 Sunday afternoon of St. Patrick’s Day our family was standing outside the American Muslim Institute on the Tri-Faith Commons listening to local faith leaders mourn and honor those who had been murdered while praying at their mosques in Christchurch, New Zealand on Friday.  Scanning the crowd, I saw many of the usual faces—the same people had gathered months ago at Beth El to mourn those murdered at worship at Tree of Life Synagogue in Pittsburgh.  This sort of event has become too common.

Sebastian, as any three-year-old, grew restless and wanted to walk around.  It was my turn, as Michael and I had been taking turns entertaining him while the other one listened to the speakers.  Sebastian decided he wanted to go potty, so we entered the mosque.

Earlier, before the vigil began, Sebastian was full of curiosity, so we had already gone inside to look around, and I had already explained some features of the mosque.

As we came to the men’s bathroom, I showed him that we would have to take our shoes off.  A sign instructed us to, and there were chairs to sit on and shelves on which to place the shoes.  He found this different but went along.

Inside the bathroom he asked, “What’s that?”  It was the area for washing of feet.  I explained, “Before they pray they wash their feet, hands, and faces.”  An adolescent Muslim boy at a sink near us smiled and responded, “Yes, that’s what we do.”  He seemed pleasantly surprised that I was explaining Muslim worship practices to my son.  Sebastian asked if we were going to wash our feet; I told him we were not, as we were not attending a prayer service in the mosque.

Back in the hallway, we sat down to put our shoes on.  The teen boy, and another, were sitting there as well, and they began to engage Sebastian in conversation with bright smiles.  Their names were Mahmoud and Ahmed.  They asked if he had any further questions, that they would be happy to answer.

Sebastian grew a little shy, but soon did have a question.  He noticed on the opposite wall some openings and was curious what they were for.  These openings were the size of mail slots for receiving donations.  Mahmoud and Ahmed answered Sebastian that this was for zakat, money that is given to support the poor.  I asked Sebastian if he wanted to put some money in the slot, and he did of course.  Doing so seemed to make him very happy.

Mahmoud and Ahmed then led us downstairs where children were playing.  Their kindness, hospitality, and attention to Sebastian were holy gifts on this day of mourning.

And I thought: How easy it is.  How easy it is to raise a child with interfaith understanding and appreciation.  This is not difficult.

In Sebastian’s library are books on Islam and Judaism, Buddhism and Hinduism.  We read about cultural traditions and religious holidays from around the world.  He knows and interacts regularly with people of various faiths, races, and cultures.  He has visited a synagogue and a mosque and asked his questions and had them answered.  And he’s not yet four.