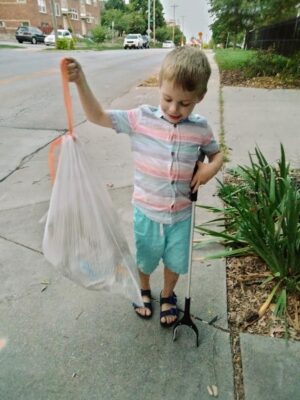 All through the summer, as Sebastian would walk from my house to my Mom’s apartment, he would get annoyed at the trash he’d see on the ground.  “We need to come pick this up,” he’d say.  And then one Sunday about a month ago on the way to church he saw some litter and insisted that after church we were coming back to pick it up.  Which he reminded me of that afternoon, so we took a trash bag and our grabber and headed down the street.  Sebastian not only cleaned all the trash between my house and the church, he then spent about an hour walking around the neighborhood picking up trash.  “That was fun,” he said at the end as we threw a full bag away.

Then within a week he wanted to do it again, and head along a different route to pick up the trash, which we did.

I told him that when I was a kid we called people who threw trash on the ground “litter-bugs,” so now when he sees trash outside he shakes his head and says, “Look, litter-bugs!”

At the end of one of his trash collecting excursions he said to me, “Take my picture and share it, because maybe people will see it and they’ll pick up their own trash so I don’t have to.”

I mentioned to him that maybe his trash removal activity was something the neighborhood association would be interested in.  I asked if he’d like to make a proposal to organize and chair such an effort.  He thought about it and responded, “Yes, that’s something I’d like to do.”

So, last night he briefly presented his idea to the Executive Committee of the Blackstone Neighborhood Association during a Zoom meeting.  He spoke about the importance of helping the environment.  Of course the group approved his idea, and he is very excited.  I told him we needed to pick a day and then prepare an announcement to send out to the neighborhood.  “I’m going to invite my friends too,” he said.