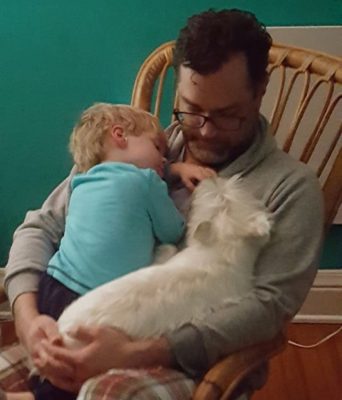 The first night I was gone, Michael was carrying out the bedtime routine with Sebastian.  After reading a couple of books and beginning to rock, Sebastian said they needed to pray.  Now, this is usually something I do with Sebastian, so Michael was a little surprised, but went ahead.  They prayed for family and friends by name and then Michael, knowing my routine, ended with the Lord’s Prayer.

Just as Michael was about to say “Amen,” Sebastian (who’s only two, remember) grabbed Michael’s face and said, “You forgot the bread.”

Michael then realized that he had, in fact, forgotten to say, “Give us this day our daily bread.”  So, he went back and added it.

Colleagues in Cleveland were thrilled with this story of theological formation that’s working.

Then I returned to Omaha.

My first night back I was doing the bedtime routine.  As I was about to finish the Lord’s Prayer, Sebastian grabbed my face and said, “You forgot the butter.”

“The butter?”  I asked.  Then I remembered that in the blessing his daycare uses before meals they mention bread and butter.  I told him, “The butter’s in the prayer you use at school.”

I then asked, “You think we should add butter with our bread in the Lord’s Prayer?”

Then I ventured, “You think that would be an improvement?”