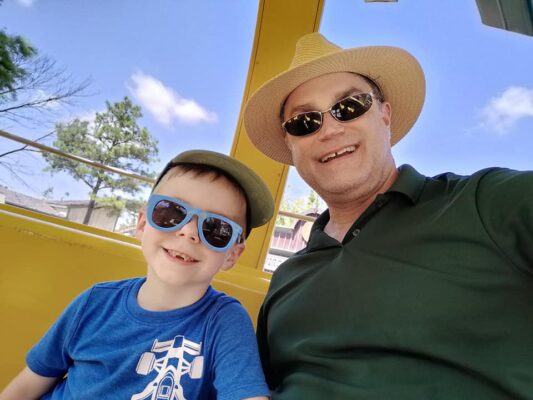 During 2020 I realized that when we could travel more easily again that I wanted to visit people I care about because I was missing them so.  I assume I wasn’t alone in this decision during the worst of the pandemic isolation.  Then, add my divorce to the mix, and my need to reconnect and recenter became even more important.

In mid-June I made a quick trip to my hometown of Miami, Oklahoma because they were hosting their first ever Pride Festival.  Miami’s population is around 12,000 and there are no local LGBT organizations, but a few folk decided they needed to host a Pride, and in a few months they organized a superb event.  It was powerful for me to be in my hometown park—site of so many family reunions, church picnics, and Independence Day fireworks shows—watching drag queens perform and trans kids march.

That day I also was able to have a long talk with one of my high school teachers with whom I’ve been very close for decades.  She’s also an ordained Episcopal deacon, so she gets my spirituality and ministry.  She was able to provide perspective for me that encompassed my entire life.  I realized that when she said at one point, “What you just said sounds like something you told me while you were in college.”

That week I also stayed with my dear lifelong friend Jason Huffman, and we had many rich conversations.

Only a week after this quick trip Sebastian and I left on our summer vacation of two weeks.  This was the trip I had been imagining since last year.  We traveled to Fayetteville, Arkansas, Dallas, Texas, and Oklahoma City visiting family and friends.  All of these are places where I’ve lived and worked and maintain close connections with people.  The folks in Dallas were particularly wanting to see us, as Sebastian had never been there before.

We did some sight-seeing on the trip, but most of it was spent hanging out with people.  Many of the days were deeply relaxing.

By mid-way through the trip, I realized it was working.  I felt re-centered, reconnected to my past and sense of self, and renewed.

I hope after the losses of the last year and a half, that you are able to have a similar experience.  All of us have been reminded of what and who are important to us.  Let’s give our attention to what strengthens us.