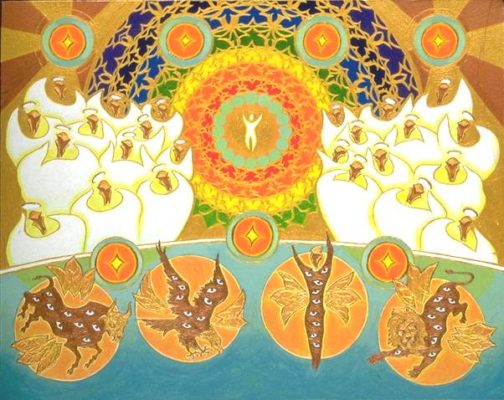 Growing up as a Southern Baptist, my religious culture was deeply shaped by a reading of Revelation as the prediction of the “end times.”  We were taught decode symbols for their contemporary meaning.  For example, an devastating swarm of locusts must mean a battle that would include helicopters.  We believed in a rapture of all Christians followed by seven years of tribulation during which evil would reign upon the Earth, before Jesus would return and defeat the forces of the Antichrist at the Battle of Armageddon.

When I went off to college at Oklahoma Baptist University, my professors taught me academic approaches to interpretation, particularly historical-critical method.  I vividly remember once in a class on Paul when the professor, who was even one of the more conservative of the religion faculty, was asked a question about the “end times” and he answered, “I don’t think we should worry about the second coming of Jesus until everyone knows about the first.”

So I soon learned to ignore the Book of Revelation and all that eschatological speculation I’d grown up with.  Which meant I was like many Christians throughout the centuries who have de facto excised the book from the canon (for instance, John Calvin wrote commentaries on every book in the New Testament except Revelation).

In my first year of full-time ministry, I was a youth minister at a moderate Baptist church in Fayetteville, Arkansas.  When I asked the youth what they wanted to study, one girl mentioned Revelation.  At the time the Left Behind novels were popular.  She hadn’t read them, but had friends who had.  She wanted to understand what it was that they seemed to take so seriously but she had never heard about.

Well, I wanted to respond to this curiosity, so I asked my senior minister for help.  He shared with me his academic commentaries on the book and that year our moderate Baptist publishing house, Smyth & Helwys, published a study guide.  So I began to read and study in preparation for a class with the youth.

And suddenly the curtain was parted and I began to see and understand Revelation in ways that made it one of my favourite books.  Revelation was written to help the struggling Christians of its time understand how to remain faithful to God in the midst of the Roman Empire; it wasn’t about the end times.  Revelation is really about how nonviolent sacrifice overthrew violence, rather than being a militaristic book.  Revelation was about how hope in the midst of suffering, a vision of new creation, a book full of music and song that worships the glory of God.  It was a guide for us to be faithful dissidents in the midst of American empire.  In other words, it was so many things, a rich and fascinating book.

So, I invite you to join us on Wednesday nights at six as we explore this controversial, strange, wonderful text.

NOTE: Wednesday, March 6 there will be no Bible Study.  Instead there is an Ash Wednesday worship service.