< Back to Sermons
Dance, Then
Save Me 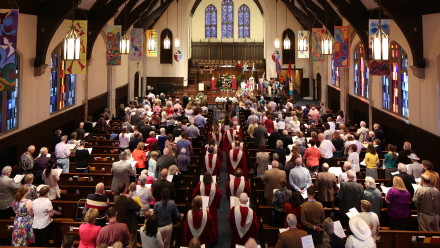 Near the beginning of this sermon series on the Psalms we looked at Psalm 1, which is an introduction to the entire Book of Psalms.  That poem tells us that the happy person is the one who follows in the way of God.  These folk are “like trees planted by streams of water . . . [and] in all that they do, they prosper.”  That poem also tells us that “The wicked are not so, but are like chaff that the wind drives away.”

Which sets the stage for today’s Psalm, number 73, of which the great bible scholar Walter Brueggemann says “We come now to what may be the most remarkable and satisfying of all the psalms.”  END_OF_DOCUMENT_TOKEN_TO_BE_REPLACED More

Near the beginning of this sermon series on the Psalms we looked at Psalm 1, which is an introduction to the entire Book of Psalms.  That poem tells us that the happy person is the one who follows in the way of God.  These folk are “like trees planted by streams of water . . . [and] in all that they do, they prosper.”  That poem also tells us that “The wicked are not so, but are like chaff that the wind drives away.”

Which sets the stage for today’s Psalm, number 73, of which the great bible scholar Walter Brueggemann says “We come now to what may be the most remarkable and satisfying of all the psalms.”  [Read Psalm 73]

Children generally reach a point in their development when they realize that the world is not fair.  This realization using comes with some crying and foot stomping.  That children insist upon fairness may reveal something basic about our human search for meaning and purpose.  On the most basic level, we expect things to be orderly and just.

But, reality isn’t like that our parents tell us.  “Life is not fair.”  Part of maturing is learning that the universe isn’t orderly, that there isn’t a meaning or purpose to every thing that happens to us.  I suspect that even as adults this realization still ticks us off.  We’ve just learned to cope with a world that isn’t as good and right as we think the world should be.

People’s driving habits really annoy me.  I think Omaha has worse drivers than anywhere I’ve ever lived.  Of course it may be that the entire society has simply gotten to be bad drivers over the last few years, I don’t know.  But on any given day on Omaha’s streets you’ll see a huge number of people running red lights, speeding on residential roads, pulling out in front of other people, etc.  Now that I have an infant in the car, I’m even more aware of what other drivers are doing, so I’m even more annoyed than usual.

Last week I was sitting waiting on a friend, parked alongside the street at 50th and Blondo.  In a fifteen minute timeframe about 25 cars drove through my line of sight.  And only five of them didn’t break some traffic law.  Cars didn’t stop properly at the intersection, one dangerously pulled out in front of another car, a number of them took the turn too sharply, a huge number weren’t even driving in their lane, somehow thinking parked cars meant they could drive entirely within the opposing lane of traffic, when the street is actually wide enough for two cars to pass one another even with a car parked along the curb.

By the time my friend arrived, my hackles were raised, and I was in full dudgeon.  Yes, I am fully aware that as I age I’m becoming more and more of a curmudgeon.  No telling how insufferable I will be when I’m seventy.

What annoys you about contemporary society?  Is it the ubiquity of bad cell phone manners?  Is it the annoying presence of television screens in restaurants that aren’t sports bars?  Is it people who don’t put their shopping carts in the bins conveniently provided by the grocery store?  Is it the epidemic of narcissism or its cousin–self-involved cluelessness that makes people discourteous?

Frankly, I can say yes to all of those.  They annoy me.

Why do all of those things annoy me?  Because I was raised right.  I was raised to be kind and courteous, to follow the driving rules, to be considerate of other people.  And it seems that all of the growing number of people who behave differently think they are entitled to lead undisciplined lives, that they are the exceptions.  I think they are corroding society, and they probably would think I’m being uptight.

Psalm 73 is written for me.  For this poet expresses indignation that the wicked seem to be prospering.  Oh, I know he is being more serious than quibbling about shopping carts and traffic rules.  He really means the polluters who ruin rivers or the corporate raiders who devastate communities when factories close or the bankers who lose billions of other people’s dollars and still get bonuses or the politicians who make decisions that wreck other people’s lives.

But I believe that a lack of consideration and discipline in the little things is one reason the wicked get away with all the big things.  If someone learns that following the little rules is inconvenient and that they can get away, maybe even get ahead, with breaking them, then that person will usually begin to break the bigger rules as well.

This psalmist is angry and complaining to God—the people who break the rules seem to be getting ahead of those of us who are doing the right thing, leading disciplined lives.

The psalmist confesses, “I too have considered making the change.  Why should I live a righteous life if other people are getting away with and succeeding while breaking all the rules?”

Yet, the psalmist doesn’t throw his heritage away and embrace the undisciplined life.  Why?  “I would have been untrue to the circle of your children,” the psalmist writes.  Living according to the law of God wasn’t something the psalmist did in isolation, God’s way is a life lived in communion with other people.  And not just those around us right now.  The community of God’s people extends across the generations.  The psalmist realizes that to live wantonly would have defied the community and broken the circle, harming society now and harming future generations.

Walter Brueggemann points out that this psalm is about the basic choice between commodity and communion.  He writes:

Covenantal faith teaches that communion with God—and derivatively solidarity with one’s neighbor—constitutes the true goal of human existence.  The alternative, now offered among us in the market economy, is the endless pursuit of commodities that promise to make us safe and happy.

This basic life choice is also what animates the recent encyclical by Pope Francis.  He writes that a worldview has taken hold of society, a worldview that sees and treats the earth and other people as objects to be used for our own benefit.  That worldview has led to violence, exploitation, corruption, and pollution that are damaging the common good.  What we need, he proclaims, is a change in humanity, drawing upon ancient and deep spiritual teachings of all the faith traditions, so that we see ourselves intimately connected with everyone and everything else in a universal communion.

I’ve been so deeply moved by his encyclical, in which he invites every person on the planet to enter into dialogue about the issues he raises, that I’ll be preaching on some of those themes in October and November.

So the teaching of our faith tradition—in the ancient poet and contemporary priest—is that there is a basic choice—we can follow the way of God, the way of communion with all creation OR we can indulge the self, pursuing our own interests, and treat everything else as a commodity that exists for our own use.

Sure, the psalmist writes, people who choose the self do often seem to get ahead.  But at what long term cost to the fabric of society and to creation and ultimately to themselves?

Psalm 73 begins with the statement of the traditional worldview of the way of God—that the good and upright person will be blessed.  The psalm then states the problem—but that doesn’t seem to be what happens in reality.  Which lead to the author’s temptation to forego the way of God and live the way of self.  But, then the poet realizes the damage such a life causes.

By verse sixteen the psalmist knows that he should continue in the disciplined life of God’s community, but writes that this “seemed to me a wearisome task.”  How often have you known the right and good thing to do, but found it wearisome, when maybe breaking the rules would have been so much easier and faster?

The psalmist knows what should be done, but lacks the motivation and will to do right, until, in verse 17, the psalmist “went into the sanctuary.”  There, in worship with the people of God, this poet discovers the inspiration to live the good and faithful life of communion.  There, in worship, the poet experiences the accompanying presence of God and realizes that the true meaning and purpose of life is to draw nearer to God.

The psalmist has moved from the naiveté of the basic worldview that everything should be fair, through the disorientation of reality and temptation, and now into a new orientation.  In the long run of time, in the big picture of the cosmos, it is a life lived in communion, obedient to the way of God, that finds fullness.  The self-interested and self-involved life that treats everyone and everything else as commodities might succeed in the short term, but those lives will ultimately perish from the earth.