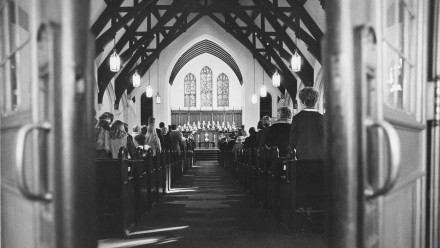 Almost a decade ago the rock band Green Day released an album entitled American Idiot.  One of the songs on this album is entitled “Jesus of Suburbia.”  The song begins:

Almost a decade ago the rock band Green Day released an album entitled American Idiot.  One of the songs on this album is entitled “Jesus of Suburbia.”  The song begins:

The chorus of the first part of the song goes:

Despite this claim that there is nothing wrong, the character in the song clearly feels that there is, in fact, much that is wrong.  The second movement of the song says,

In this city of the dead, you read “the holy scriptures of a shopping mall” and the children are

So, the character in the lyrics runs away to find what he believes leaving behind “This hurricane of . . .  lies.”  He declares that he has lost his faith, because “the Jesus of Suburbia is a lie.”

The philosopher Charles Taylor has written that the best answer to the question “Who am I?” is not your name or your genealogy.  Rather, the best answer is “what is of crucial importance” to you.

To know who I am is a species of knowing where I stand.  My identity is defined by the commitments and identifications which provide the frame or horizon within which I can try to determine from case to case what is good, or valuable, or what ought to be done, or what I endorse or oppose.  In other words, it is the horizon within which I am capable of taking a stand.

Green Day’s song reveals a generation who has lost this place to stand.  The worldview they were raised with, including its version of Christian faith, has failed to provide meaning in the face of doubt and fear.  It has failed to provide guidance during times of despair.  It has robbed them of the ability to experience joy and beauty.  It is as vacuous as soda pop–fleeting and inane.

Charles Taylor writes that when we lose the commitment that identifies us, we are at sea.  We don’t know the answers to our questions.  We don’t know what is significant.  We are in crisis.

To develop as human beings, to become our best selves, we must commit to something. We must decide what is of crucial importance for us.

Here at the First Central Congregational Church, we offer you a dynamic, visionary, and authentic faith that will awaken your best self.  Faith rooted in Jesus the Christ.

In an image-saturated world,
a world of ubiquitous corporate logos permeating your consciousness
a world of dehydrated and captive imaginations
in which we are too numbed, satiated and co-opted
to be able to dream of life otherwise
a world in which the empire of global economic affluence
has achieved the monopoly of our imaginations
in this world
Christ is the image of the invisible God
the image above all other images
the image that is not a façade
the image that is not trying to sell you anything
the image that refuses to co-opt you
[but is rather]
a flesh-and-blood
here-and-now
in time and history
with joys and sorrows
image of who God is
He is the source of [our] liberated imagination. . .
because [our imagining] all starts with him
and it all ends with him . . .
whatever you can imagine . . .
he is [the] source, purpose, goal

Because he has reconciled all things.

That last series is mostly a quote, with adaptations, from Brian Walsh and Sylvia Keesmaat.

There is an old joke that UCC really stands for “Unitarians Considering Christ.”  And there is a truth to that joke, or it wouldn’t be funny.

It is true that many members of the UCC do not believe all the traditional doctrines and orthodox theologies about Jesus.  We have many different visions of who Jesus was and what authority his life holds for us today.  And that diversity is an essential part of who we are, as we believe that each individual is responsible for their own spiritual journey, free of outside control.  We have no test for faith.  And it is this openness to diversity which has led us to embrace God’s stillspeaking voice, as we have learned new things from those people who were once excluded and oppressed.

It is also true that we are deeply respectful of those who sink their roots in other ground–our sisters and brothers of other faiths or those of no religious faith who strive for goodness, peace, and love.  We do not presume a monopoly on truth.  We do not believe that our perspective is the only perspective.  Even the Christ may appear to us in different guises.  The Ultimate Mystery of this life is far bigger than we can ever hope to understand.

All of that is true.  But it is false to think that Jesus is not center of our faith in the United Church of Christ, for Jesus is the ground in which our roots grow.  Ours is a progressive faith precisely because we are followers of Jesus.

For it was Jesus who modeled a life of justice and peace.  Jesus who included the outcast.  Jesus who loved unconditionally.  Jesus who showed compassion.  Jesus who confronted the powers of evil.  Jesus who was an agent of reconciliation.

The Jesus we proclaim is not the “Jesus of surburbia,” vacuous, fleeting, and inane.  But a rich and fertile ground in which to plant our roots and draw living water that will re-create us.  A place to stand–something to believe in, to hope for, and work towards, a place to know ourselves.

As we are bold, compassionate witnesses, co-creating a just and sustainable world, we manifest the Christ, continuing to make Christ real flesh-and-blood, here-and-now, in time and history.  Not some abstract doctrine.  Not some ancient historical figure read about in ancient books.  But a real, living presence awakened within us.

And that is what we mean when we say we are the United Church of Christ.

As you therefore have received Christ Jesus the Lord, continue to live your lives in him, rooted and built up, established in faith.