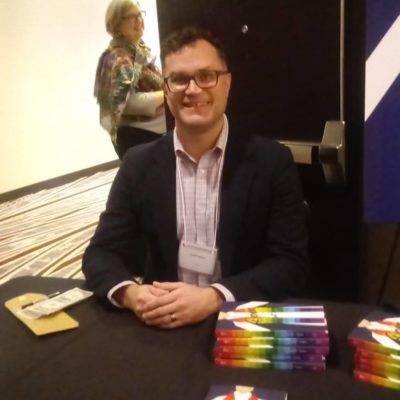 Two books I read early this year were written by friends I made at the Yale Writer’s Conference.  Nancy Gray’s Sun, Sand and Single is her memoir of teaching for Aramco in Saudi Arabia in the early 1960’s.  One gets a snapshot of a different era through the eyewitness testimony of a daring and persistent young woman.  Nancy was twice a part of group’s reviewing my memoir , and it was wonderful to celebrate both of our books finally making it into print.

The other book by a friend was Upon a Bright Red Bench by Pallavi Rebbapragada.  This is a collection of short stories set in contemporary India.  I have enjoyed my friendship with Pallavi, as occasionally a Facebook post about something Sebastian did receives a comment from Delhi!

Preaching on the Gospel of Mark this year, I read two fantastic commentaries, A Reordering of Power by Herman C Waetjen and Binding the Strong Man by Ched Myers.

For Christmas 2017 Jim Harmon gave me Cutting for Stone by Abraham Verghese which is one of the best novels I’ve ever read.  Set mostly in Ethiopia, we follow a young man raised in a hospital who himself becomes a surgeon.

But I read a number of magnificent novels this year that rank among the best I’ve ever read, including All the Light We Cannot See by Anthony Doerr, Parable of the Sower by Octavia Butler, My Brilliant Friend by Elena Ferrante, and Segu by Maryse Condé,.

I was thrilled when Condé won the New Academy Prize this fall, the one created in lieu of no Nobel being handed out.  The second round of this prize was voted upon by readers around the world.

Butler’s novel, published in 1993, is set in California in the 2020’s when our society has been devastated by climate change, income inequality, and violent politics.  Butler was prescient, and few books better helped me understand our own time.

Flights by Olga Tokarczuk is an award-winning Polish novel, that appeared in America in English translation for the first time in August, and is a fascinating book unlike any novel I’ve ever read.  Composed of short pieces, only a few of which I would describe as short stories, the novel is held together not by plot or character but by themes.

I also learned much from two excellent works of twentieth century philosophy The Open Society and Its Enemies by Karl Popper and Wickedness by Mary Midgley.  The Blood of Emmett Till by Timothy B. Tyson taught me much more about this significant episode in our history, particularly the courage of his mother and others African-Americans who gave witness in the case and, sadly, also how the white supremacist reaction may help to explain some of our current troubled times.

A quite fun read (and then effort to discover and listen to the music) was O Sing unto the Lord: A History of English Church Music by Andrew Gant.

The book I finished on New Year’s Eve was Light in the Dark by Gloria E. Anzaldúa, a fascinating discussion of how we put ourselves together again after we’ve been broken apart by trauma using concepts drawn from indigenous Central American cultures.  I may write more about it in a future column.

87 books in 2018, a new record.  I’m not trying to set records, it’s just that I now spend most of my evenings after our son’s bedtime, resting quietly and reading.