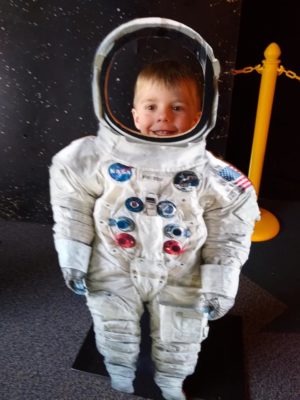 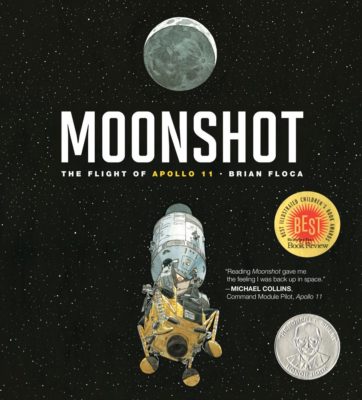 On Saturday, July 20, I was caught up in the commemorations of the fiftieth anniversary of the moon landing, and I was hoping Sebastian might indulge me.  He and I went to the Strategic Air Command Museum where special events and exhibits were celebrating the historic day.  In the gift shop we bought some Apollo 11 toys and brought them home to play.

That afternoon we watched a moon landing special together, and I was surprised by how engaged he was in watching grainy old black and white television footage.  That night CBS online was rebroadcasting in real time their broadcast from fifty years ago, so we lay in bed together watching that and he fell asleep in the crook of my arm.

His fascination has lasted, so we have continued to encourage it.  We ordered some great books including the beautiful Moonshot by Brian Floca, I Am Neil Armstrong by Brad Meltzer, and A Computer Called Katherine by Suzanne Slade (so that he will also learn some of the math and engineering effort behind the adventure).  We now read one of these books every night.

Yesterday morning, Sebastian clambered into our bed with his Saturn V rocket and Eagle moon lander.  He then proceeded to re-enact the launch, landing, and return to Earth.  He even has the words memorized, declaring “Eagle has landed” as the toy came to rest on the pillow beside me. 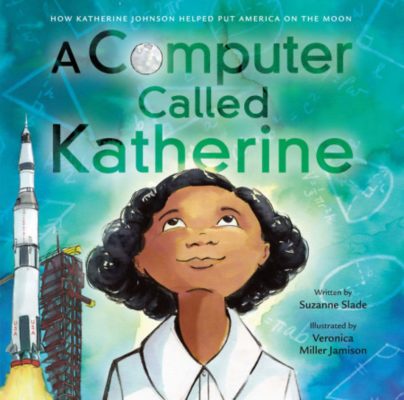