Scott’s Column: Preaching in the Age of Trump 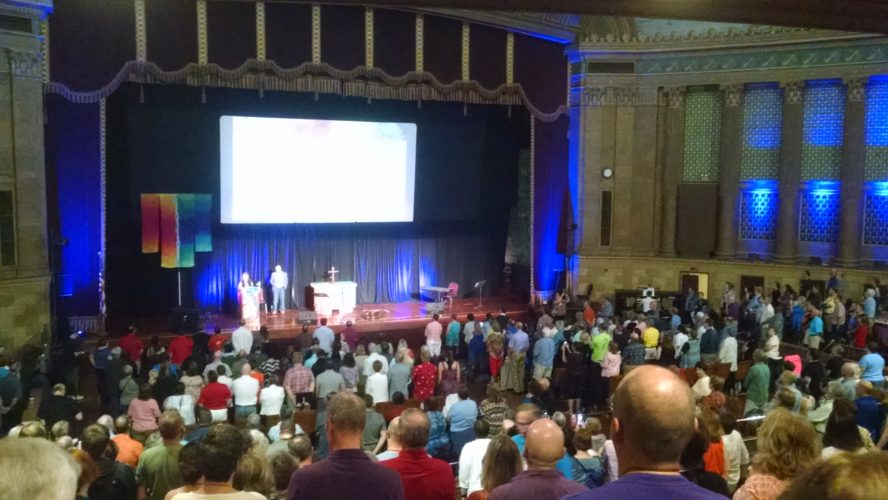 Last week I was in San Antonio for the annual Festival of Homiletics, that gathering of 1,800 preachers who spend a week listening to preaching and lectures on preaching from some of the most skilled practitioners of our craft. Whereas last year’s festival on prophetic preaching hit every social justice issue hard, this year seemed, despite its title of “Preaching on the Borders,” to really be focused on what it means to be a preacher—what is our purpose, our call, our task—and particularly in this new age in which we live—the Age of Trump and its fake news and alternative facts.

“To be a pastor these days is to navigate a treacherous terrain—you should be scared,” warned Amy Butler, pastor of New York’s Riverside Church.

“The time is way too dangerous to waste a sermon,” proclaimed theologian Brian McLaren.

Retired Methodist Bishop Will Willimon admonished us: “If you like holding hands, go into nursing.  We are called to be preachers.  To tell the truth.”  He was in a particularly irascible mood and declared, “The point of the sermon is to increase stress.”

Willimon told us a story.  Recently a congregant came up after a sermon and said that he shouldn’t have dealt in the sermon with the white supremacy that infects American Christianity.  Willimon said to the person, “I guess Jesus did make a mistake in calling you to be a disciple, then.  I had thought maybe you were better than you actually are.”

And there was more.  On my personal blog I summarized many of the speakers I heard and my reactions to them.  In many ways this year was less challenging, but as I write this in the San Antonio airport I’m actively reflecting, as I have been since November, on what our preaching purpose is in this moment.

Serendipitously, I’m finally reading a Wendell Berry classic, What Are People For?  In an essay on the writer Edward Abbey, I encountered a fitting description of the preaching task in our time.  Berry wrote, “He sees the gravity, the great danger, of the predicament we are now in, he tells it unswervingly, and he defends unflinchingly the heritage and the qualities that may preserve us.”

The decision I came to last winter was that the preaching role was not direct opposition to the daily changes in public policy or the latest daily outrage but was something far more important.  As Berry writes, “Our country is not being destroyed by bad politics; it is being destroyed by a bad way of life.”  The 2016 election and this new Age of Trump are just symptoms, I believe.

The more basic problem is a breakdown of morality and the social fabric.  I must confess my own sin in that it took a presidential election for me to more fully see the moral needs of our time.  I owe respect to the people of various perspectives who sounded the alarm earlier.

And so I believe that my task as a preacher is to tell the truth about the Gospel; to speak to what our purpose is as human beings, disciples, and citizens; to teach what it means to be a person of good character and how to live in community as a person of mercy, forgiveness, and peace.  Righteousness and virtue are not partisan.