Thank you Kathy Hoyt sharing this story of her faithful Tug at this year’s Pet Blessing! 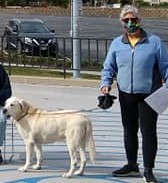 Unlike the rest of us, Tug is getting older.  He’s not the same one or two-year-old the Nebraska Humane Society allowed us to bring home back in 2008.  Shortly after he settled in at Bear Woods, he was at my side when I fell 15 feet onto the concrete garage floor.  He stayed with me until I crawled into the house to dial 911.  He was solicitous of me even while the medics placed me in the ambulance and him in his kennel. He waited patiently for me to return home from the hospital a few days later.  And ever since then, he’s truly been at my side. For a while he loved to chase and return one kind of frisbee, dropping it in front of the lawn mower, so I would have to stop, pick it up and throw it to him again. Once that frisbee disintegrated, he was never interested in another one. Still he stuck by my side.

As many of you know, my husband Scott was a 43-year member of AA.  In dog years, Tug has been an 84-year member of AA also.  But Tug’s AA stands for Attention and Affection. He gives me his AA whether or not I deserve it.  He insists we go on early morning walks, regardless of the weather or how well I slept.  He introduces me to so many different members of our new apartment community.  He welcomes others he meets, not depending on their size, shape, age or color of their fur.  He usually likes their owners as well.  I wouldn’t be the same person without My Tug, as I’m sure many of you feel about your beloved pets as well.

God, thank you for bringing these loving creatures into our lives for as long as we can hold onto them.  Amen