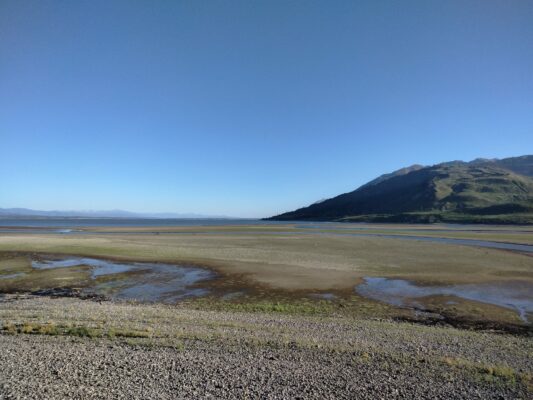 “Arrange for change” is one of the catchphrases in the National Park Service brochure on “Climate Change in National Parks.”  Given that studying resilience in the midst of a changing climate was one of the research themes of my sabbatical, I saw that brochure and grabbed it.  It discusses the reality of climate change, how it is affecting the parks, and what the parks are trying to do to prevent and adapt.

Of course in middle June when the Yellowstone River flooded, I thought that my grand big summer trip might not happen.  More than a year of planning, and then the effects of climate change.

Fortunately, most of the park reopened by the time we visited, but there were still some closures and the difficulties.  Sections were closed because roads were washed out.  Some of the lodges, activities, and campsites were closed—though the only effect on our plans was canceling our stagecoach ride through the Lamar Valley.

The most visible sign of climate change in the park is the widespread loss of forest from wildfires in recent decades.  The NPS has radically altered its fire management from the philosophy of preventing all fires that dominated when I was a kid (I still have my Smokey Bear from childhood).  Entering the park from the east, you drive through vast swathes of old damage and new growth.  Of course, some of this is expected, natural, and part of the life cycle of a forest, but you also know that the fires are more frequent and intense than they once were.

The biggest climate impacts on Yellowstone were not so visible.  They talk about how the changing climate is affecting which species of plants grow where.  The alpine ecosystems are shrinking and what had been lower altitude plants are creeping up.

Yellowstone is also in the midst of a decades-long battle of fighting invasive trout that someone put into the lake or river, which led to a dramatic decline in the native cutthroat trout and the various bird and mammal species that depend upon them.  The park reports success in this endeavor, as cutthroat have rebounded 80 percent.

While Yellowstone had been inundated with extra water this season, Grand Teton is having the opposite problem.  Jackson Lake is greatly reduced.  On the northern end there is a grassy plain where once the lake stood.  At Colter Bay the marina is sitting on dry ground.

We were told that the lake is radically down this year because of droughts in Idaho last year.  Idaho can take a certain amount of water from the Snake River in order to irrigate potato crops.  They took everything they could last year, radically reducing the lake.  And snow melt and rain were not sufficient to replenish it.

So in one corner of the country you see vividly the contrasts of extreme weather, too much water in one place and not enough in another.

While on our July trip, the rest of the nation and most of Europe were baking in a heatwave.