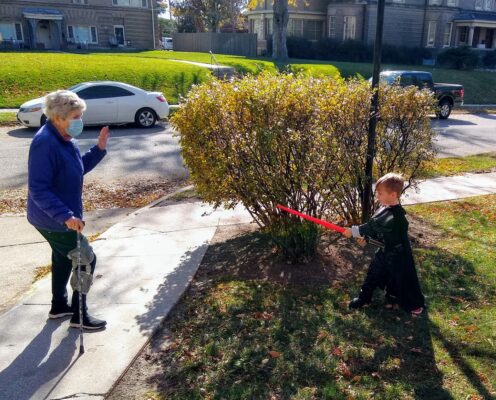 My sister ordered Sebastian an Advent calendar.  He knows it has arrived but hasn’t seen it yet.  The other day he asked what day he could open it up and begin opening the doors.  Now every day in November he’s counting down to his Advent calendar.  Which is pretty funny, I think.

This year has, of course, been weird and calamitous.  There’s a lot not to be thankful for this year.  But I have been wondering lately what I am thankful for during this strange season.

For me, much of the year has been viewed through the lens of how the pandemic and its ramifications have affected Sebastian, so when I think about what I’m grateful for (and not) this year, so much of it focuses on him.  Here are a few memories from this year, related to the church.

On Halloween we didn’t trick-or-treat like we usually do, but Sebastian got dressed up in his Darth Vader costume and we visited three neighbors by pre-arrangement.  One was Nikki Zimmerman who came outside on that beautiful afternoon.  There was this delightful moment I caught on camera (in the photo above) when Sebastian was playfully confronting Nikki with his light saber and she played along.  I love moments like this.

The church’s Trunk-or-Treat was also a fun way for our kids to see each other and get some experience of normality.  I’m grateful to Katie for organizing and the various folk who volunteered to help.

I’m very grateful for the church staff who were incredible in the ways they helped Sebastian this year.  When the quarantines first hit in March and his preschool closed, Sebastian began coming to the office with me.  We quickly developed a routine of spending a couple hours at the office each day.  Soon the hallways and office spaces filled with toys, balls, and scooters.  We quit putting them away because the building wasn’t open and no one else was around.  Staff began taking work breaks to play ball or ride scooters in the hallway.

Thanks to Stephen Bouma for showing Sebastian how the organ and harpischord worked.  He liked to wander up to the sanctuary when Stephen was practicing.

At Easter, while we were having a staff meeting, Sebastian hid eggs and at the conclusion of the meeting, everyone hunted for them.

In late April, the staff threw him a fifth birthday party when he couldn’t have a party with his friends.   Kerrie brought balloons, everyone brought gifts.  We discovered that if you placed the balloon just right in the airflow from the air conditioning unit in the office that it would float there.  The “magic balloon trick” became a staple of office entertainment for months.

When volunteers began working in the office again this summer, Sebastian had a handful of new people to talk with and give demonstrations of his toys.  Thank you to the office volunteers who endured hour long presentations on Super Wings, Transformers, etc.

Thanks to Jenny Pfeifer for keeping the candy jar stocked.

Now the staff says they miss seeing him every day and the energy and joy he brought during this difficult time.

Back in the spring Katie held Zoom Sunday school classes.  Sebastian would often talk non-stop, a clear sign of missing his church friends.  He would often cry on Sundays that he couldn’t go to worship, and he was so excited the day he finally could.

And thanks to all the congregants who endured Sebastian zoom-bombing meetings, classes, daily reflection videos.

This has been a rough year.  I’ve never been so stressed, anxious, or worried for the well-being of my child.  But, it would have been so much worse without all these people who have loved my child and other children and done their best to help.  Thank you.