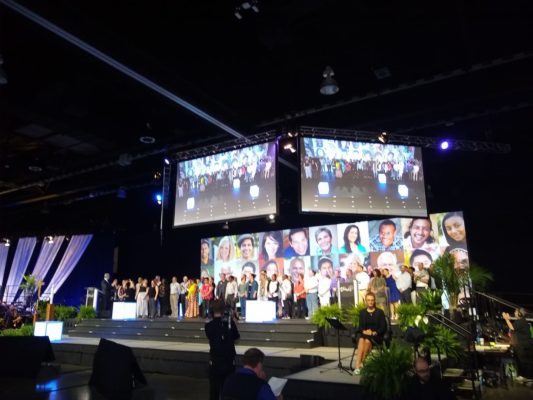 “The covenant communion of the congregations with each other gives each the responsibility of engaging in a common conversation,” writes historian Randi Jones Walker in my favorite book on United Church of Christ polity, The Evolution of a UCC Style.  I find this sentence helpful in responding to the most significant controversy that arose this year during General Synod—that over Resolution 8.

In my previous column summarizing Synod, I mentioned the need to write more about this particular issue.

Resolution 8 was introduced through the Michigan Conference and would have denied space in the exhibit hall to the Faithful and Welcoming Churches, which represent evangelical, conservative, orthodox, and traditional congregations in the UCC.  This group formed in opposition to the denomination’s embrace of marriage equality for same-sex couples.  The authors of Resolution 8 described the presence of Faithful and Welcoming in the exhibit hall at General Synod as “demeaning of and emotionally and spiritually hurtful to lesbian, gay, bisexual, transgender and gender-queer United Church of Christ members, visitors and delegates” and that their presence “undermines the extravagant welcome stated by the United Church of Christ as its core value.”

Conversation about Resolution 8 began before Synod.  One of the most outspoken opponents to the resolution was the Open and Affirming Coalition, the organization that supports full equality for LGBT persons in the church.  ONA issued a public statement of opposition and its leader Andy Lang spoke passionately about it in various settings.  One of the main ideas leading the ONA coalition’s opposition was stated “As a movement and a church, we need to stay in relationship with non-ONA churches, because otherwise there is no possibility of transformation.”  Andy Lang said that if we excluded the Faithful and Welcoming Churches, which would likely lead to their leaving the denomination, then we had abandoned the LGBTQ children in those congregations.

Discussion was passionate.  Those who supported the resolution spoke of the harm caused by exclusion and discrimination.  They too wanted to protect youth and believe that synod should be a “safe space.”  They were expressing a core value of our denomination, that we should respect the dignity of every person.

Some of the resolution’s defenders said it was only about the exhibit hall and was not about excluding Faithful and Welcoming Churches from the UCC.  I was one of many who thought that this was naïve, as the resolution would have surely compelled churches throughout the denomination to take a position, leading to departures from those who felt excluded and insulted.

The committee that discussed the resolution altered its language but ultimately recommended it not be adopted by the synod.  During floor debate a group of teenagers from the Michigan Conference spoke emotionally for its passage.  LGBTQ people lined up to speak on both sides of the issue.  The floor debate became entangled in parliamentary procedures (largely due, in my opinion, to the vice moderator making a mistake in something she said).  The resolution was tabled and referred to the United Church Board for consideration, since they have the authority to set policies for General Synod.  After the close of synod business, the Board held a listening session for people who wanted to speak to the issue and who felt floor debate had been cut off too early.

I am opposed to Resolution 8.  I agree with the reasons the ONA Coalition stated, but have others as well.  Because this conversation raises fundamental issues for our denomination, I have looked again at my favourite book on our history and polity and even skimmed through some of the historical documents, such as the Cambridge Platform of 1648, contained within the multi-volume The Living Theological Heritage of the United Church of Christ.

I believe it hypocritical to have spent decades advocating for my full inclusion in order to then turn and try to exclude others.

Instead, I have a deep desire to remain in relationship with people who disagree with me.  I do not believe in compelling people to adopt the positions I have.  I do believe in using all my best persuasive tools to convince them to voluntarily change their minds.

I don’t think Resolution 8 had any hope of passing, as it would have required a 60% supermajority to succeed.  I do worry that the debate may have damaged relationships with our more conservative churches.

The truth is, I too viewed the resolution as a threat to my core religious values.  Had Resolution 8 passed or even come close to passing, I would have felt compelled to seriously reconsider my choice to become a member of the United Church of Christ.

Fortunately, I did find a home in this movement that is inclusive, prophetic, ecumenical, diverse, that entertains doubt, and generally relishes living in the midst of tensions.  These conversations can remind us of what we value and why.  And so I agree with Randi Jones Walker, when she writes of us UCC people, “We remain obligated to engage in conversation with those who hold positions different from our own, since none of us can see everything clearly.”